Using my Cabinet of Curiosity image I created as an example, I’d like to talk about layers and masks.

Using layers can be advantageous in many respects. Using layers can not only help with adding depth to an image, but it can also help arrange an image, and edit specific points without damaging the rest of the image. Blending options can help the piece look more natural, in the image above, I used the blending options to merge the multiple layers in a more natural progression. If it weren’t for these layering options, not only would the image look like it wasn’t on a grunge styled paper, but also, the images of my late grandparents would not look like one image, and the blending watercolour effect better myself and my father and my grandparents would look unnatural. The idea of good graphic design, was once said, to make things look and feel as natural as possible.

Using masks instead of deleting parts of an image can also be advantageous. If you were to delete parts of an image, you would never get it back properly. By using masks, if you make a mistake, or choose to feather the image slightly, it is easy to modify. Using masks can also help you work in textures, for example the water colour effect in my image.

From the photoshop tutorials, I have learnt that layers are vital and using masks instead of deleting an image are very advantageous. I hope it will prove to help in the future, and not just for this specific project.

As a part of a practical lesson, we had to make a collage in the style of Richard Hamilton’s ‘Just what is it that makes today’s homes so different?’ (1992), which gave our own views on society today.

I chose to base mine on the loss of innocence and how those in charge of our nations seem to be in the middle of it all. Political scandals and there being ‘near nudity’ and ‘adult themes’ on daytime t.v. (i.e. before the watershed), have been the main causes of concern. The image I created depicts so called role models making everything seem ok. They merely joke and pass off the women in front of them and their dress sense. It has become the norm.

In a day and age where nations seem to be outgrowing the need for politeness, euphemisms and subtlety, it is no wonder we are out of control. I’m not saying it’s right, but if kids now a days were raised as I was, the threat of a light hit to the back of the hand would enough to put anyone  back in their place. As well as consistency and the love behind it. No parent wants their child to be like ‘that’. Some parents don’t even praise their kids when they do right.

Children now a days get away with murder.With the internet and television, barely being filtered, it’s no wonder children seem to be getting less well behave. Television shows tell us that casual sex, perversion, voyeurism, swearing and violence are all ok.  Kids now, have access to so much. I didn’t have a mobile phone until just before high-school, now I see 7 year olds with I-phones. I mean seriously, what are they going to do? Snap chat Dora the Explorer? BBM Banana’s in Pyjamas? WhatsApp the Clangers? (Granted, the last one may not be around any more).  I also had limited time on the house computer for quite sometime. Now, children have more privacy to search around on a non-filtered sources.

I can remember a school boy harassing me on the bus once, because I asked him politely if he would stand up for this old lady who just got on the bus. I personally couldn’t do it due to ill health, but he was more than capable. I would never dream of swearing around children or in front of strangers, but this pip-squeak did. If I was his mum, a nice clip around the ear or grounding him would have been enough.

The funniest ones, I have to admit, are the hypocritical parents. Parent’s will be a child’s first role model, and will shape how the child grows up. The main example of hypocritical parenting has to be when a parent tells their son, or daughter, to “Stop F****** swearing”. If they cannot even get one sentence out without swearing, why should they be telling their kid not to curse?

With role models like some parents, some famous people and some politicians, who is to blame when it comes to society breaking down? 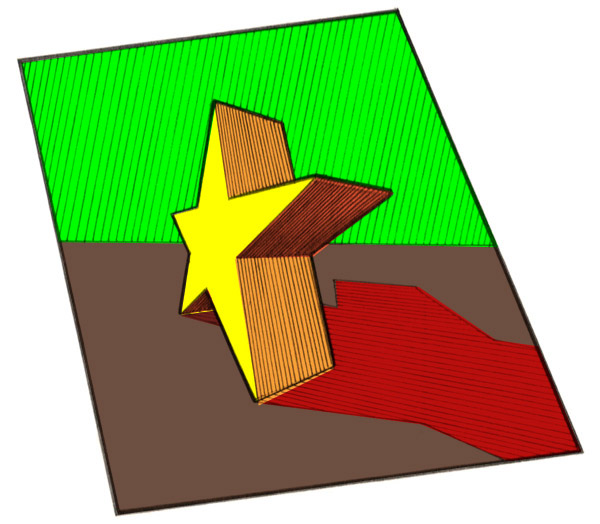 In learning about photoshop, we learnt about layering. During the lesson we coloured in this vector, using different layers.